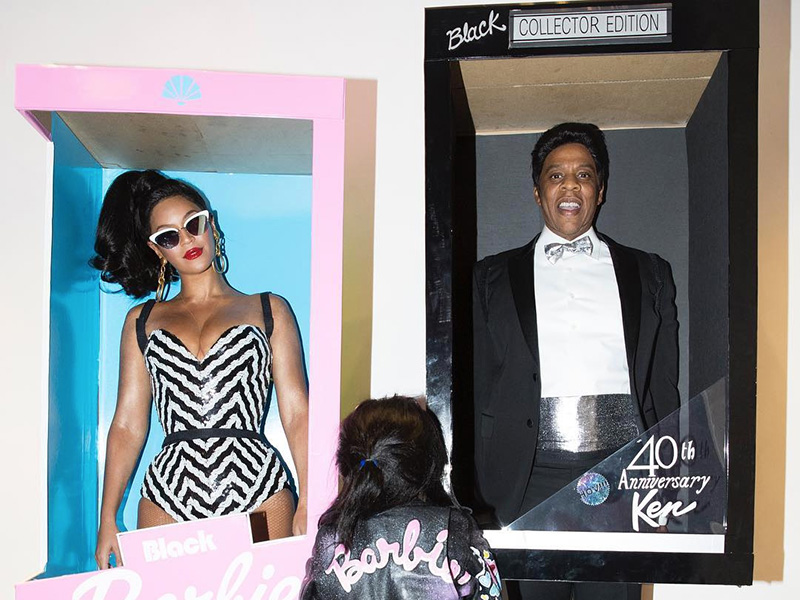 And the award for best couple Halloween costume goes to Beyoncé and Jay Z.

Hip Hop’s power couple did it real big for Halloween this year, dressing up as real-life replicas of Black Barbie and Black Ken dolls.

Beyoncé shared a handful of pictures on Instagram Monday night (Oct. 31) showing off her family’s Halloween costume idea, which, in our opinion, totally won the Internet (Sorry, Teyana Taylor and Iman Shumpert). The billion dollar couple’s adorable 4-year-old daughter Blue Ivy also made an appearance dressed up as a cute little barbie girl. 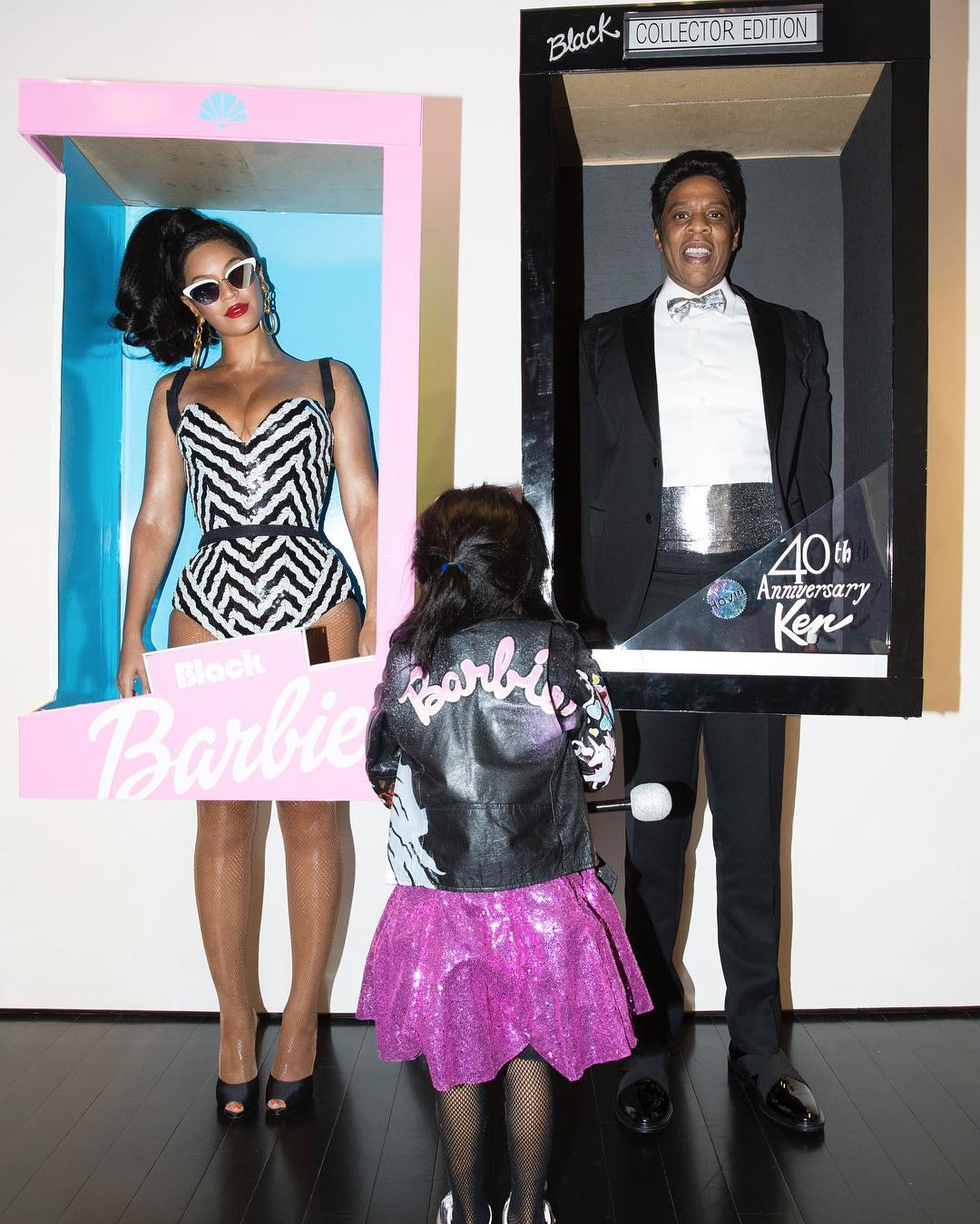 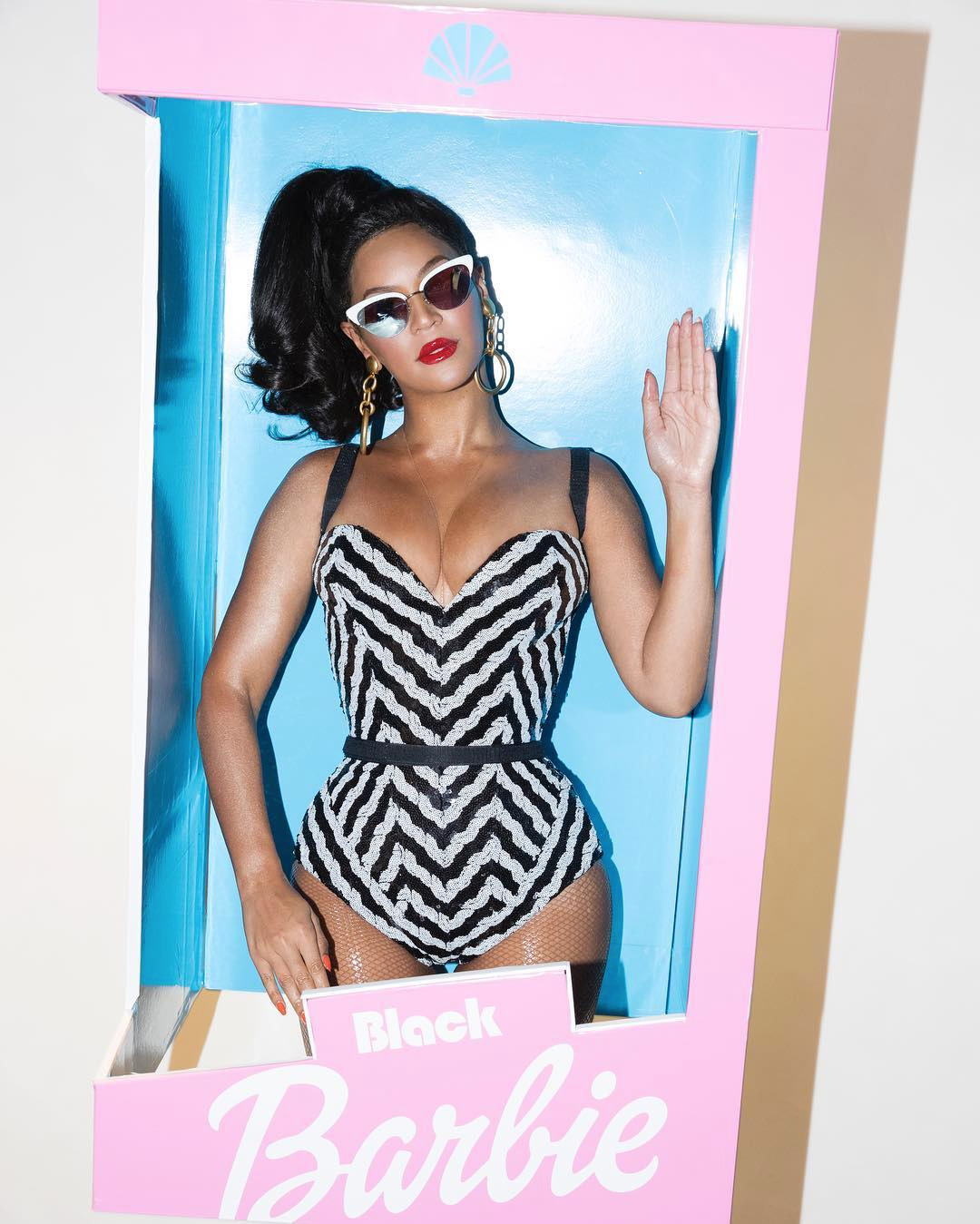 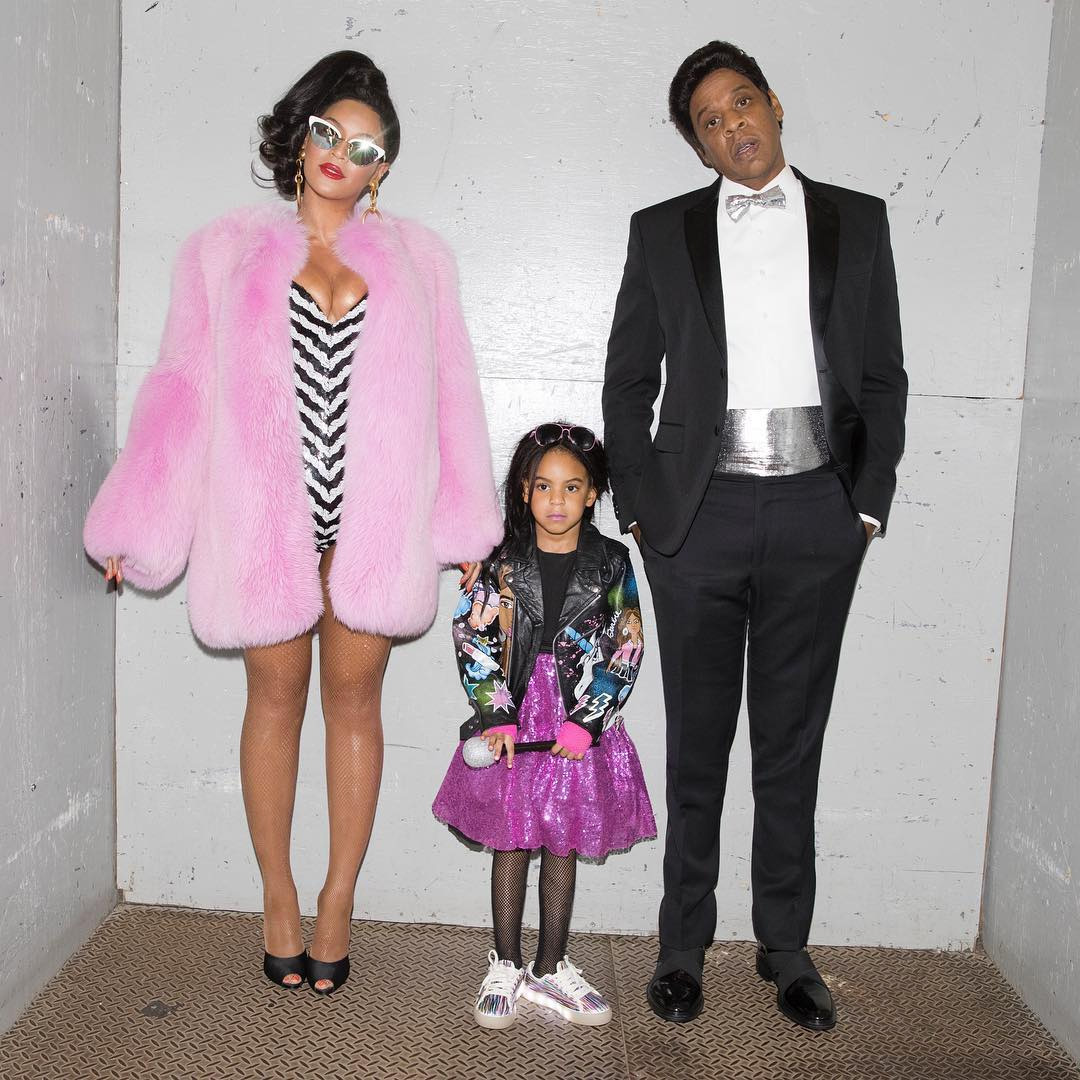 It goes without saying that the Carters nailed their Halloween costumes this year.

Beyoncé and Jay Z Won Halloween With Black Barbie and Ken Costumes (PHOTOS) is a post from: Gossip On This – Pop Culture, News, Videos & Humor 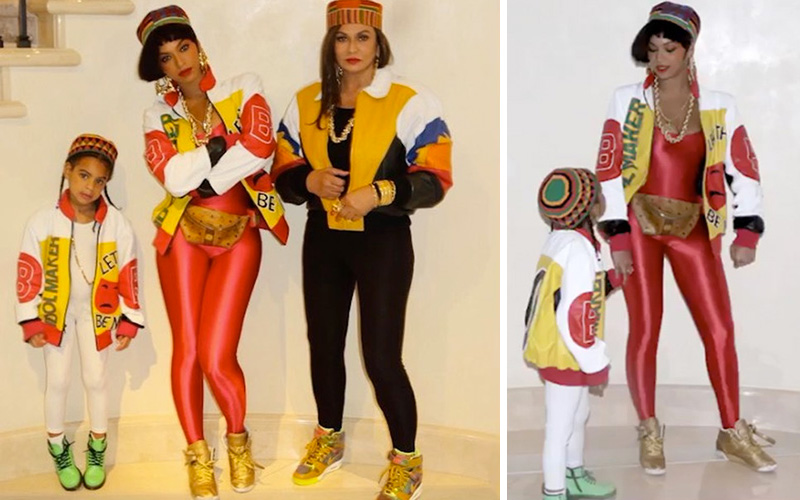 Beyoncé, Blue Ivy and Miss Tina Lawson did not come to play with you hoes, they came to slay with their group Halloween costume this year.

The adorable three-generation trio (Mother, Daughter and Granddaughter) apparently decided they wanted to take a shot at winning Halloween 2016 by dressing up as the legendary hip hop trio — comprised of Cheryl “Salt” James, Sandra “Pepa” Denton, Deirdra “DJ Spinderella” Roper — in their classic “Push It” video. It’s not really clear who’s who (we think Blue is Salt, Bey is Pepa and Miss Tina is DJ Spinderalla), but none of that matters, because regardless, the ladies definitely nailed it!

Beyoncé shared a video compilation showing off the costume (look out for Jay-Z’s dressed up as Dwayne Wayne from “A Different World!”) on Instagram Friday (Oct. 30) before the fam stepped out to celebrate cousin Angie Beyince’s 40th birthday at an 80’s/90’s-themed party for Halloween weekend. And Miss Tina Lawson continues to be our favorite person on Instagram by sharing actual video footage from the party, like this clip of Beyoncé and Jay Z dancing to “The Humpty Dance.” Check out the pics of Beyoncé, Blue, Miss Tina and Jay Z’s 80’s/90’s-themed Halloween costumes below: 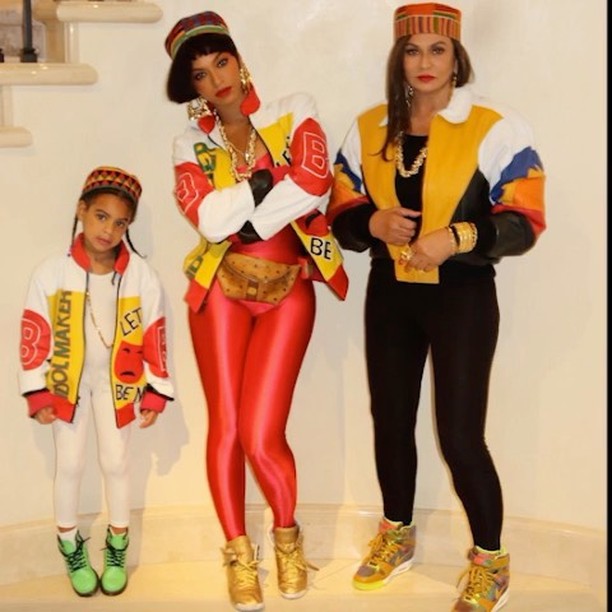 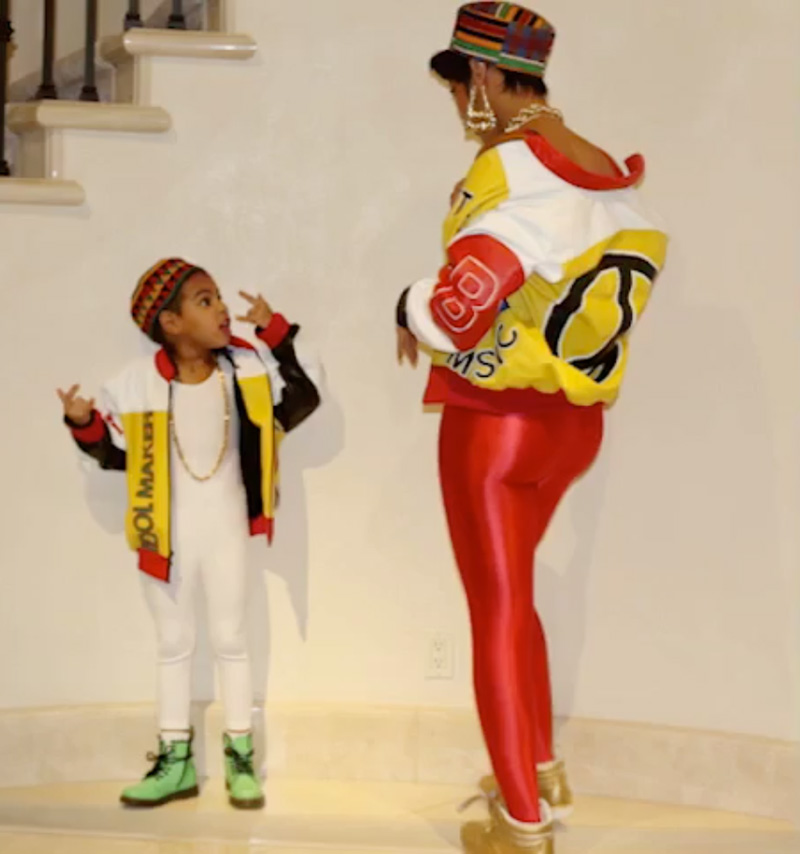 Don attempts to unite his family by making peace between his two baby mamas Ashley and Whitney, Ryan celebrates his 30th birthday with a 1920’s themed masquerade party, Van confronts Cobra about her attitude, and Danielle’s boyfriend Terrance acts a plum fool at Ryan’s birthday party.

Back to the business and hustle at 9Mag, the notorious tattoo shop in the heart of Chicago, season two follows the crew as they are faced with huge changes in their personal lives and even bigger changes in the shop that once brought them all together. This season welcomes back series regulars Ryan, Kat, Phor, Charmaine, Don, Van, and Danielle, along with new tattoo artists Cobra Kat and Junior Diaz.

Competition in the shop is on the rise and 9Mag is faced with more threats than ever as ego and tensions within the group cause loyalty to be tested. The drama continues when Van is released from prison, a secret love child is revealed and an unexpected relationship forms that causes a divide within the shop. Expect more ink, more heart and even more drama from the streets of America’s roughest city. 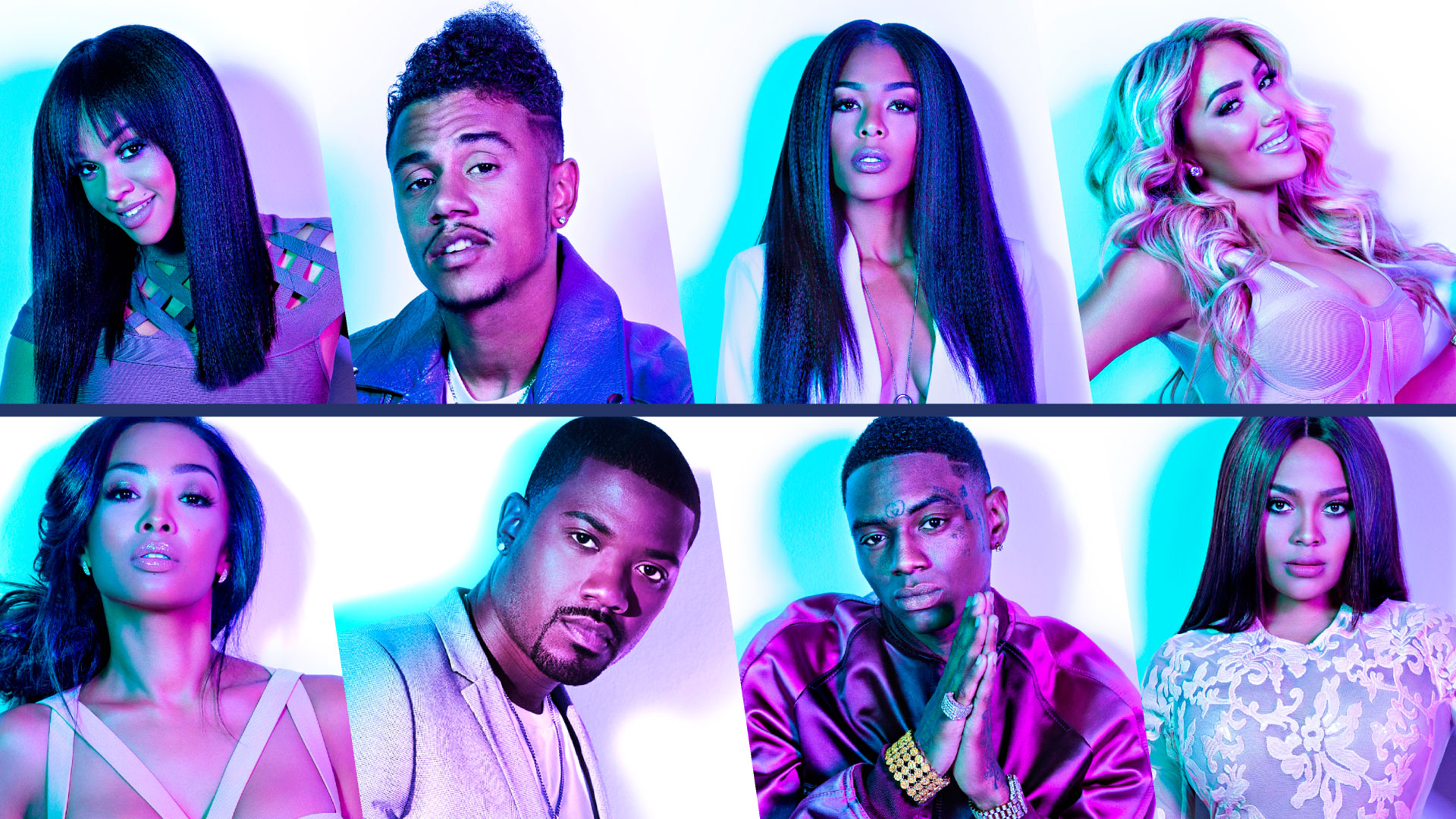 In the third-season finale, Ray and Princess remain at odds, threatening the couple’s upcoming wedding. And later, Teairra realizes the gravity of her personal and legal woes.

In its third season, Love and Hip Hop Hollywood continues to follow the young, hip-hop elite as they strive to either “make” or “maintain” a life in the La La Land of Hollywood!

Ray J proposed to Princess Love in last year’s finale, and now their journey to the altar begins. But is Ray, the quintessential Hollywood playboy, really ready to settle down? Meanwhile, Ray’s mother, Sonja Norwood, thinks their engagement is preposterous and searches from here to eternity for an effective way to stop the couple from saying “I do”.

Willie Taylor and his wife, Shanda Denyce are whirling in their own marital morass. Their drama begins when Shanda gets shocking news of Willie’s potential infidelities. While Willie ducks from any admission of guilt, Shanda is confronted with in-your-face proof in the form of Kyesha, a rapper from their hometown of Chicago. With the welfare of her two kids as her main concern, can Shanda possibly reconcile her husband’s unfaithfulness?

Teairra Mari finds herself in trouble with the law! After she was slapped with highly publicized misdemeanor charges last year, Teairra’s music career hit bottom. This season, we document the twists and turns of Teairra’s personal and legal struggles. Will Teairra’s friends rally to help bail her out of a bad situation before things get worse?

Brandi Boyd, and her husband, Max Lux, fall upon good times, turned bad. After Max receives a heavy pay day, he wants to open a fund for their son, Brandus, but a college savings account is far too boring for Brandi, who seeks other business opportunities. When Max discovers Brandi secretly used the stacks to enter the rag trade, Max exits left. How will Brandi win Max’s trust back after such a betrayal?

Speaking of secrets, fan favorite Miss Nikki Baby, has a few juicy ones of her own. Enter Safaree Samuels – producer, rapper, and romantic ex of Nicki Minaj. Safaree thinks he’s putting his Jamaican moves on Nikki, only to find Nikki has outmaneuvered him! Safaree soon discovers he’s sharing Nikki with a hot Latina model, Rosa Acosta. Nikki tries her best to juggle both her hotties, but will they agree to share in her game of love? Or will Nikki be left out in the cold?

Moniece returns this season, rested and ready to address all her “haters” from seasons past! No one is safe from her wrath, including the father of her son, Fizz, her old nemesis, Princess Love, and even Lil’ Brandi!

Season 3 also welcomes two adorable newcomers – producer/songwriter A1 and his fiancé, the beautiful singer/songwriter, Lyrica. They appear to be a happy duo, collaborating side by side in the “industry”. However, we soon learn their extended family life is anything but harmonious! Both of their mothers, Lyrica G and Pam, are supremely high maintenance and their petty conflicts threaten the couple’s wedding plans. Hilarious mother-in-law vs. mother-in-law skirmishes ensue as the two vie for control over the young couple’s life.

Finally, Masika Kalysha returns and starts a family! We join Masika at her hospital bedside, as she and rapper father, Fetty Wap (of “Trap Queen” fame), celebrate the birth. After a very public battle Fetty Wap erupted on social media, the soon-to-be single mother struggles to figure out how Fetty will fit into her daughter’s life.