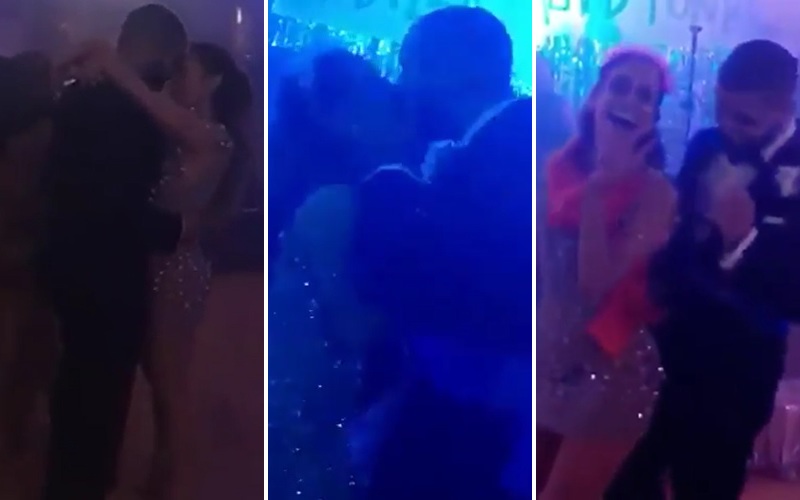 This Drake/Jennifer Lopez thing is really happening and the two can’t stop packing on the PDA. The rumored couple were seen kissing and grinding on each other a recent party. We’ve got the videos to prove it.

Drake and Lopez attended a prom-like winter wonderland-themed event. Though there’s still no official confirmation, the two entertainers sure seemed like a couple.

They were captured on video dancing/grinding and were even crowned king and queen of the night. The videos were shared on social media.

The two also debuted a song they’ve collaborated on. The song played in the background while they danced and lip synced to the track.

Rumors Drake and J-Lo were dating surfaced a few weeks ago and the two basically confirmed the speculation earlier this week with the same Instagram post — a photo of the two cuddling together. However, sources close to the situation are hesitant to say the two are exclusively in a romantic relationship.

A source told People magazine they “do work on music together” and they “clearly enjoy each other on another level, too.” The source added:

“Jen loves the attention and she seems very happy to be spending time with him. Drake is very charming. He treats Jen with lots of respect. She seems very smitten.”

“They seem to really like and respect each other, but it’s early. Where it goes, we shall see. Friends of them both are hoping it becomes something, but it’s too early to say more than that.”

The source might think it’s “too early to say,” but these clips tell us everything we need to know!

Here are more clips from the night:

.@Drake at a party tonight with @JLo ?? pic.twitter.com/KekZkUA044

December 31, 2016
Celebrity Gossip Comments are closed Celeb
← T.I. Not Ready to Call It Quits, Rapper Reportedly Wants Tiny Back and is Fighting for His Marriage WATCH: Ronda Rousey Knocked Out by Amanda Nunes in 48 Seconds at UFC 207 →