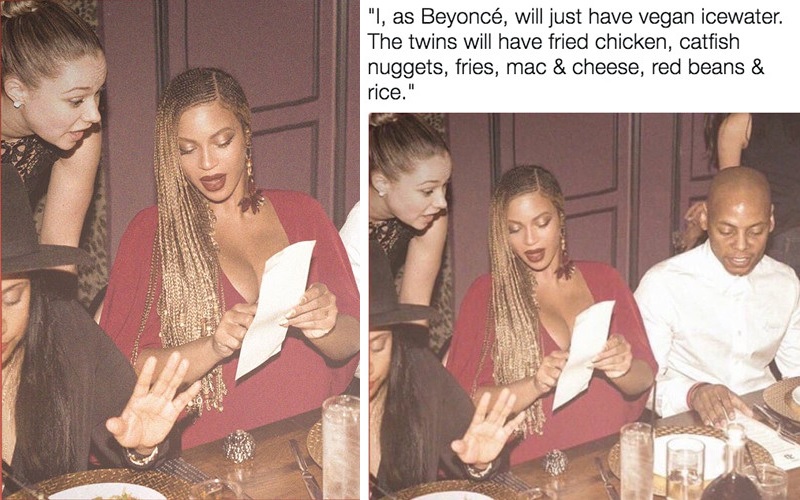 Even without trying, Beyoncé can make the most mundane tasks become a spectacle. Black Twitter got their creative juices flowing from a picture Queen B posted of herself ordering from a menu. However, one photo completely captivated the internet: Beyoncé conversing with waitress and ordering from the printed menu. The relatable moment turned into a meme with people imagining what she ordered and said to the waitress.

"I actually invented Lemonade so it should be free." pic.twitter.com/k8Yq3aGTLa

"Who is "Gratuity" and why am I paying for her food?" pic.twitter.com/UGGmZZMjo0

Beyoncé: No, Blue has her own money. pic.twitter.com/0QAZ6oV83y

"I, Beyoncé, will have the vegan ice water. But the twins will have the fried chicken dipped in gravey & hotsauce w/ a side of cheesy fries" pic.twitter.com/QPK7gyL8cx

Waiter: We can't put…NECKBONES…in the… GREENS, you say.

Beyoncé: Yes you will and that right there that's changed to cornbread now. pic.twitter.com/DqNXY2RoSp

"and i'd like to keep it that way. adjust it." pic.twitter.com/2lhKB4Y1ho

"I only had an appetizer & a water…" pic.twitter.com/o3OqzVjAWv

"change 'Beyonce' to 'Beyoncé' and give me my damn writing credit." pic.twitter.com/eKg9NDtemt

"You see right here it says 'Gratuity' and none of us ordered that" pic.twitter.com/cqQCbtljef

Waiter: *inner thought* who does she think she is ordering all this stuff?

Beyoncé: I'm Beyoncé and make sure them candy yams are candied. pic.twitter.com/MJ039SqYDX

"Go ahead and bring a lemonade to my husband. Keep him on his toes." #Beyonce pic.twitter.com/2LPJzxJ02G

Beyoncé: Let me just have the…
Waitress: How about I have them make everything on the menu and you can make a choice after seeing them! pic.twitter.com/fxmHktctNg

"take this $2.75 charge off here, I actually told y'all to take that soda back and then l ordered a water with lemon." pic.twitter.com/oX1yvuJbxD

Instead of the Mahi-Mahi, can I just get the one Mahi because I'm not that hungry? pic.twitter.com/UnlU16v5rp

"I don't care what the menu says, fries should come WITH my burger, not as a separate entree." pic.twitter.com/kMfLDFQmu5

Despite the humorous interpretations, I’m sure one thing rings true: Queen B and them twins probably ate very well that night!

This Photo of Beyoncé Ordering From a Menu Has Been Turned Into a Hilarious Meme is a post from: Gossip On This – Pop Culture, News, Videos & Humor