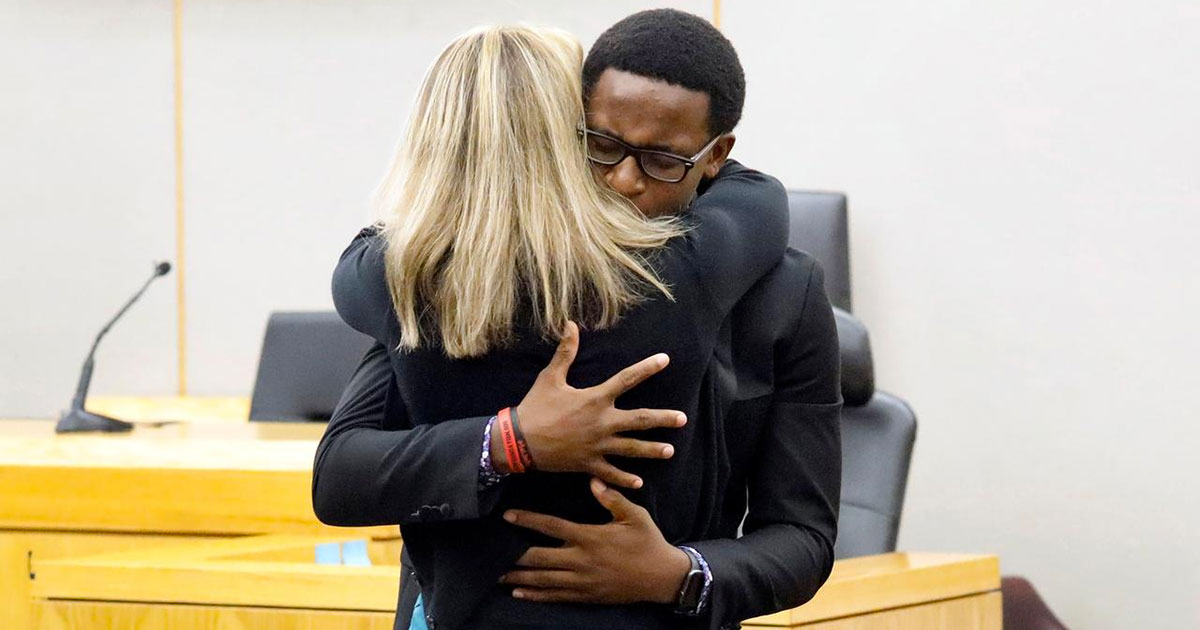 After former Dallas police officer Amber Guyger was sentenced to 10 years in prison for murdering Botham Jean in his own apartment, the victim’s brother, Brandt Jean, gave an impact testimony and used his moment on the stand to forgive Guyger.

Botham Jean was shot and killed by Amber Guyger while he was sitting on his couch, eating ice cream and watching television in his own apartment.

Guyger testified that she accidentally walked into his apartment, which was unlocked, thinking it was her own, and opened fire on him, believing that he was an intruder.

She said she had worked a long shift that day and mistakenly parked on the fourth floor instead of the third floor where her unit was, directly below Jean’s.

While on the stand yesterday before her conviction, Guyger tearfully apologized for killing Jean and said she “never wanted to take an innocent person’s life.” She added: “I’m so sorry. This is not about hate — it’s about being scared.”

Following his victim impact testimony, Brandt Jean made it clear that he holds no ill will towards the former cop who killed his brother and accepts her apology.

“If you truly are sorry, I can speak for myself, I forgive and I know if you go to God and ask him, he will forgive you. And I don’t think anyone can say it, again I’m speaking for myself… but I love you just like anyone else.

Brandt then asked the judge if he could give Amber a hug. The judge said yes, and the two shared an embrace that lasted nearly a full minute as sobs could be heard in the background.

Watch the emotional moment below:

Botham Jean’s Brother Forgives Amber Guyger, Hugs Her After Testimony: “I Love You & I Don’t Wish Anything Bad on You” is a post from: Gossip On This – Pop Culture, News & Videos

October 3, 2019
Celebrity Gossip No comments Celeb
← Ex-Dallas Cop Amber Guyger Sentenced to 10 Years in Prison for Murdering Botham Jean in His Own Apartment You Big Dummy! Drug Dealer Arrested on Drug & Gun Charges After Stunting Too Hard on Social Media →