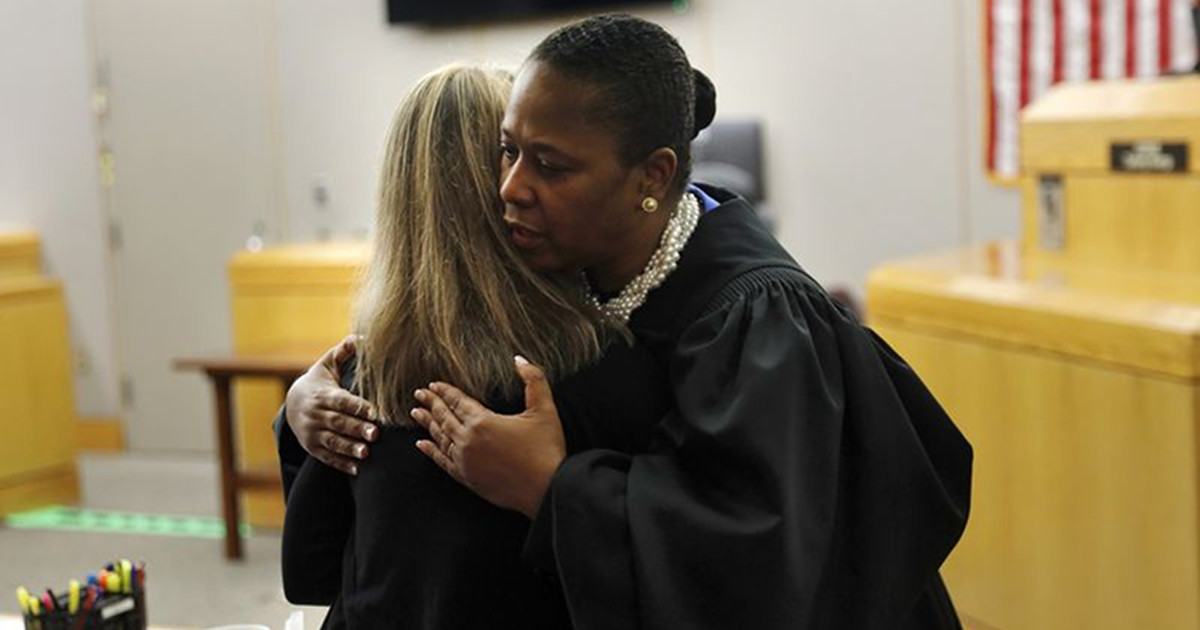 The black judge who seemingly broke courthouse norms to hug a convicted white cop for killing a black man in his own home is attempting to justify her actions.

Kemp says it was her faith and desire to see Guyger live a purposeful life that led her to hug and gift Guyger her own Bible following the trial.

“Following my own convictions, I could not refuse that woman a hug. I would not. And I don’t understand the anger. And I guess I could say if you profess religious beliefs and you are going to follow them, I would hope that they not be situational and limited to one race only.”

Kemp explained that Guyger had asked to hug her twice after the sentencing and she couldn’t refuse the request, especially given that she witnessed a “marked change” in Guyger during the trial.

“She asked me if I thought that God could forgive her and I said, ‘Yes, God can forgive you and has,’” Kemp told The Associated Press.

Kemp then took her personal Bible and gave it to Guyger.

“If she wanted to start with the Bible, I didn’t want her to go back to the jail and to sink into doubt and self-pity and become bitter because she still has a lot of life ahead of her following her sentence and I would hope that she could live it purposefully.”

Judge Kemp’s actions have been heavily criticized by many and considered unethical.

One group has requested a misconduct investigation into the matter and activists have argued that the controversial hug has taken focus from the justified conviction of a white cop killing a black man.

Guyger also received a hug from Jean’s brother, Brandt Jean, who forgave her. “I love you as a person and I don’t wish anything bad on you,” he told her.

Brandt’s show of sympathy was also criticized because convicted black criminals are rarely afforded that same forgiveness and grace by white victims or by the family of white victims.

Guyger was found guilty of murder and sentenced 10 years last week after shooting her neighbor, Botham Jean, to death in his own apartment in September 2018.

After working a long shift, the former cop entered Jean’s apartment, mistakenly thinking it was hers (Guyger’s apartment was directly below Jean’s).

Believing he was an intruder, Guyger shot an unarmed Jean; she was still in uniform at the time of the shooting.

Black Judge Tries to Explain Why She Hugged the White Cop That Killed Botham Jean & Gave Her a Bible is a post from: Gossip On This – Pop Culture, News & Videos