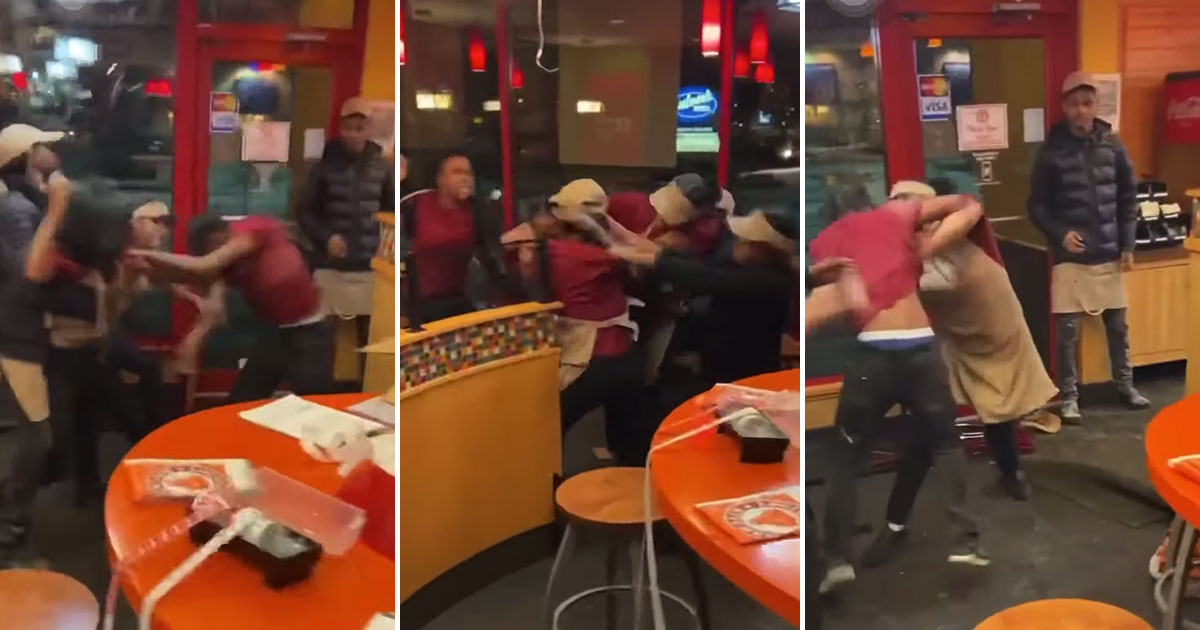 Another day, another fight at Popeyes.

Ever since Popeyes released these self-proclaimed “greatest chicken sandwiches to ever be made by man,” there has been nothing but multiple reports of fights (and one fatal stabbing) at the popular fast-food restaurant.

One incident in Maryland ending in a man being killed over breaking in line for a chicken sandwich.

Things have gotten so bad that even the Popeyes employees are starting to turn on each other over these damn chicken sandwiches.

At a Popeyes in Milwaukee on Wednesday (Nov. 13), seven employees got into a vicious brawl inside the restaurant, and the whole thing was captured on video.

The customer who filmed footage said things got “out of control” quickly. In the footage, several employees can be seen throwing punches and chairs.

“It was just out of control. That was the first thing that went through my head, like this is out of control,” Richard Fourté said.

Fourté told news reporters that there was more fighting that took place by the grilling station, but he wasn’t able to get it on camera.

“I heard one of them yell, ‘It’s a fight!’ They ran to the back by the grills, okay. Now, there was a fight back there. I didn’t get that one on tape,” Fourté said.

Police were called, but no arrests were made.

All seven of the employees, including the manager on duty, were fired. It’s unclear what sparked the altercation.

“This was an unfortunate, isolated incident which we take very seriously. The dining room was closed immediately after the altercation at 9:30 p.m. As a result of this, seven employees were terminated from the company, including the manager on duty.”

This is really starting to get pathetic and sad to see.

Seven Popeyes Employees Fired After Vicious Brawl is Caught on Video is a post from: Gossip On This – Pop Culture, News & Videos

November 17, 2019
Celebrity Gossip Comments are closed Celeb
← Unbothered King Omarion Finally Speaks on Apryl & Fizz’s Relationship: “I Don’t Feel Any Way About It” Alabama QB Tua Tagovailoa Out for the Rest of the Season After Dislocating Hip →