MILEY CYRUS has teamed up with artist MARILYN MINTER to sell artwork and T-shirts to raise money for non-profit organisation Planned Parenthood.

LUCY can laugh at herself

RYAN REYNOLDS is officially on board to suit up again for a DEADPOOL sequel.

STEPH broke up with Sam for Jeremy McConnell.

HE had to dumb himself down. 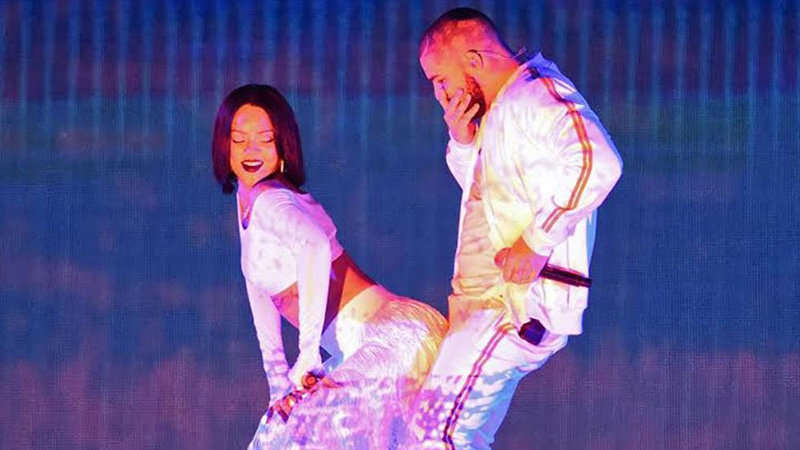 Light-skinned brothers stay in their feelings, but for Drake, when it comes to Rihanna, Drizzy’s feelings get deeper than the ocean.

Drake and RiRi have been collaborating together for several years now. It started with Drake dropping a verse on Rihanna’s “What’s My Name?” back in 2010, then Rihanna retuned the favor by crooning on his song “Take Care” in 2011.

Once Rihanna reunited with Chris Brown, things went cold between them. But now, with Chris in the rearview mirror and their latest collaboration “Work” breaking all kinds of chart records, the love is flowing like Moscato between Drake and Rihanna.

In a sign that Drake might be, could be catchin’ feelings for Rihanna, he made it a point to announce to the crowd in Toronto that Rihanna is “the greatest woman I’ve ever known in my life!”

#PressPlay After performing #Work together on stage in Toronto tonight, Drake came back out to let the audience know that #Rihanna is the greatest woman he's ever met in his life! Potential #BaeWatch? #Roommates are you here for it? Via: @rihannadaily

This shout-out comes on heels of rumors that Drake got a tattoo of Rihanna on his arm, according to the Inquisitr.

You can judge for yourself:

Does Drake Have A Rihanna Tattoo?! Is This Old News?? https://t.co/yqspNfB9VJ @Mastermind pic.twitter.com/WUJdwNgWKH

@ovojonnyroxx can't wait to get back to the city and work 6???

Given all that “work” that Rihanna put on ol’ Drizzy in the “Work” video, you can’t really blame him for seeing stars whenever he’s around Rihanna.

The only question is: Does Rihanna feel the same way about Drake?

The Drihanna fans have been praying for the Canadian-Jewish-Barbadian romance of the century since 2010.

And honestly? I’m all for it. We could use another power couple in pop music, and Drake and Rihanna can double date with Beyoncé and Jay Z, though probably never Nicki Minaj and Meek Mill.

May Drake and Rihanna continue to make sweet, sweet music together and never stop driving bitter, lonely, angry Chris Brown up the wall.

Drake Calls Rihanna “The Greatest Woman I’ve Ever Known In My Life” is a post from: Gossip On This – Pop Culture, News, Videos & Humor

BLAKE LIVELY and RYAN REYNOLDS are expecting their second child, according to reports.

Actress EVA MENDES is reportedly pregnant with her second child.